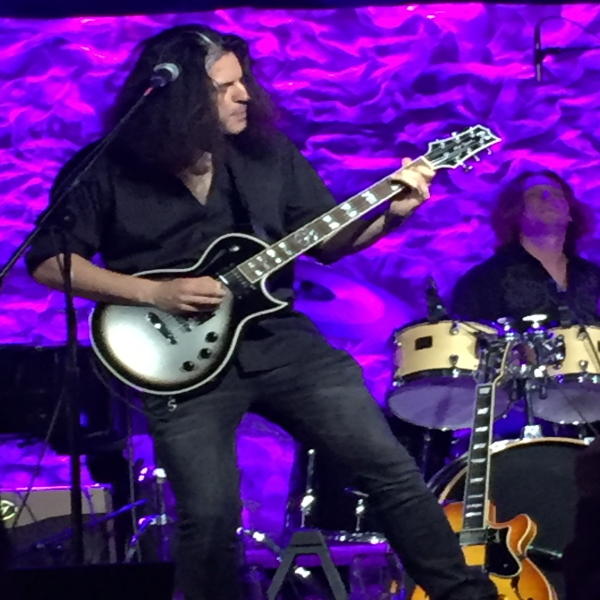 Alex Skolnick’s eclecticism is well-known. Recent projects in which he is a leader or principal player include his eponymous improvisational trio, the Alex Skolnick Trio; the current incarnation of Testament; metal-tribute-turned-original band, Metal Allegiance; and the acoustic, world-music exploring Planetary Coalition. Even with all this activity, Skolnick frequently extends his musical reach with contributions to projects led by others. I recently had the pleasure of hearing him sit in for two sets with Nathan Peck & the Funky Electrical Unit, at the 55 Bar. With Skolnick’s collaborative bent in mind, here are quick looks at a handful of his guest appearances:

Nearly four minutes into “Atman,” the penultimate track on 11:11, Rodrigo y Gabriela’s Latin-acoustic-by-way-of-metal extravaganza, comes the most surprising moment of the track—an electric guitar solo, courtesy of Skolnick. The track is intense from the beginning, and Skolnick’s burning solo is its molten core. Massive bends and tremolo picked eruptions culminate in an epic chromatic rising-and-falling sequence.

Skolnick plays on half of What Next?, pianist Klein’s second album of duo performances. On these tracks, Skolnick sticks exclusively with a clean, hollowbody-guitar jazz tone and melds with Klein’s compositions as much as he weaves lines through the changes. On “Casa China” and “No,” he jabs playfully through Klein’s restrained, low-register comping, finding gaps for improvisation between composed lines. “Where’s My Glasses” features Klein and Skolnick harmonizing in seconds on a whimsically disorienting melody. This cliché-free music depends entirely upon the mutual sensitivity of Klein and Skolnick.  Among albums on which Skolnick appears, it is unique in lacking any shred of rock or fusion guitar stylings. It shows a far corner of his musicality that, perhaps, doesn’t emerge often enough in public.

Nathan Peck is one of Skolnick’s longest-standing collaborators, holding down the bass position in the Alex Skolnick Trio since 2002. Peck’s Top Dead Center is a modern, electric funk-jazz affair, informed by neo-soul, hip-hop, and fusion. Skolnick appears only on “Top Notch,” the album opener. “Top Notch” has a lot going on, but, nonetheless, Skolnick’s solo commands the center with a Larry Carlton-in-Steely Dan snakiness crossed with metallized fusion. Skolnick’s adventurous lines are a distorted-rock-guitar highlight within a collection that is defined more by grooves, texture, and harmony than by extended soloing.

With its funky-heavy riffs and harmonized background vocals, Jen Majura’s “Sick Brain” is a strain of metal with which Skolnick’s illustrious metal career hasn’t made much contact. The scorching solo that Skolnick lays down flows over the syncopated verse riff with a descending cascade of notes that expands into wide bends, a wicked corkscrew lick, and a Van Halen-inspired tapped barrage.

On “Synergism,” tenor saxophonist Assaf surrounds himself with prog-jazz keyboardist Adam Holzman and Skolnick, on electric guitar. Broadly falling into the jazz-rock fusion domain, the resulting music isn’t like much else you’ll hear, with steady synth bass provided by Holzman and no drums or percussion. Skolnick underlines and shares Assaf’s melody before the mood grows heavier, about three minutes in, with his syncopated, flanged power chords under a sax melody. It sounds like Skolnick engages a loop of his chord riff before kicking in a thick, saturated fuzz for some extended, simultaneous soloing with Assaf. The two soloists push and pull, sometimes sounding like they are talking over one another, before finding a closing melody. Skolnick’s twisting, fuzzed-out lines on “Synergism” have more of a 70s, Mahavishnu Orchestra-inspired sound than anything else in his recorded catalog.