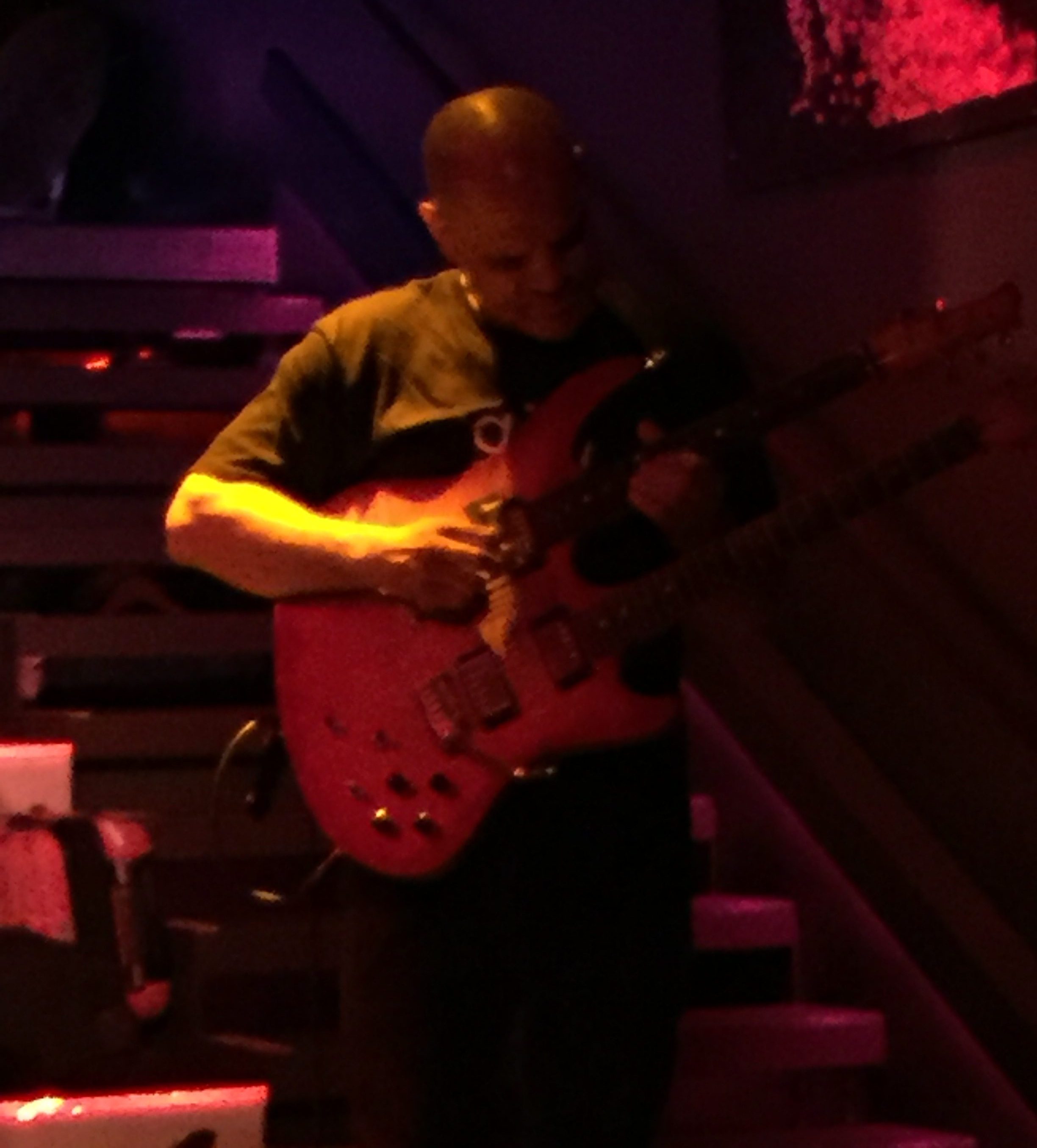 Dave Fiuczynski plays a lot of notes—in the sense that is usually meant and in another sense that is decidedly a path less traveled. For sure, his musical approach includes cleanly picked note barrages and long peaks-and-valleys jazz-fusion lines, but its most unusual salient feature is microtonality. Fiuczynski explores the notes between the notes of the twelve-tone equal tempered Western scale, drawing inspiration from a variety of both the scales of non-Western musics and the explorations of microtonal composers who fall under the broad classical umbrella.

Pretty much all guitarists are familiar with a little bit of microtonality. When you bend a note ever-so-slightly to get it to sound just like Eric Clapton, for example, that’s a tiny bit of microtonality.  Often transcriptions will notate these bends of less-than-a-semitone as quarter tones, though I kind of doubt that Clapton or the blues greats who inspired him intended anything so precise. More elaborate microtonality, however, is a game changer. Fiuczynski joked from the NuBlu stage that microtonal music sounds out of tune, and that’s not an unusual first impression. Microtonal music certainly sounds different from the styles of Western music that have found their way around the globe. Like many adventurous flavors, it starts out as an acquired taste. For some, acquired tastes become flavors they can’t live without.

That certainly seems to be the case for Fiuczynski. At NuBlu, his microtonal explorations took shape on adaptations of a klezmer tune, a traditional Arabic tune, a tune by a Mexican microtonal composer (whose name I didn’t catch), as well as tune of his own, “Apprehension.” The microtonal moves were executed on the fretless neck of a double-neck guitar. Not only did Fiuczynski play “notes between the notes” single-note lines, he played chord melodies beyond the possibilities afforded by the standard twelve-half-steps-to-the-octave fretboard. and ornamented his lines with wild swoops and Indian-inflected slides.

There is some truth to the claim that microtonal music sounds out-of-tune, but there’s a world of difference between out-of-tune hacks who don’t know they’re out-of-tune and octave-chopping explorers such as Fiuczynski. No one who’s really paying attention will mistake one for the other. I confess that my ear is not nearly as refined as Fiuczynski’s, and I have no doubt that many of the microtonal nuances of his music go over my head. But just by paying attention, I suspect that I am sensitizing myself to pitch divisions that aren’t common in the Western music that makes up the near entirety of my listening. Listening, for example, to Fuze interact with his microtonal keyboardist, whose instrument was tuned, I think, in quarter-tones, helped me isolate the sound of music that divides the octave twice as finely as most Western music. The initial effect of quarter-tone music is a floating sound. I suspect, however, that experienced quarter-tone listeners come to hear clear direction in the music, because a floating effect can be created with 12-tone equal tempered scales and harmony by playing certain notes in certain intervals in certain relationships to the guiding harmonic framework. All of this sounds a bit academic, which might not be shocking, given that Fiuczynski incubates his microtonal explorations as a faculty member at Berklee College of Music. With less emphasis on the familiar signposts of Western music, Fiuczynski’s music can sound unstable. But, what kept his performance from teleporting into completely into inscrutable corners of deep space—in addition to deploying microtones with intention—is rhythm. Fuze, as a principal member of Screaming Headless Torsos, also has deep roots in music that is as funky as it is wild, and the strength of his pulse was fully present in the Micro Kif Jamz at NuBlu, with the gravity of the one and power-trio interplay anchoring the mind-expanding microtonalites.

Here’s a fascinating interview with Fiuczynski from the Sounds of Berklee Soundcloud page:

A YouTube Playlist of Fiuczynski’s 2008 KiF Express album. The first tune, “Shiraz,” sounds to me a lot like a tune he performed at NuBlu, though I don’t remember it being introduced by name. It sounds to me like this tune juxtaposes quarter-tone sections with 12-tone-equal-tempered sections. This album is an excellent introduction to Fiuczynski’s music for rock and jazz fusion listeners—plenty of distorted guitar tone flavor!

This is seriously cool! Nominally, Fiuczynski’s Planet MicroJam ensemble does a theme-and-variations treatment of  Led Zeppelin’s “Kashmir” at Berklee’s 2014 commencement, but, at the half-way point, they throw in some “Dancing Days,” as well. The ensemble here is way more elaborate than the trio Fiuczynski led at NuBlu, and no one that whole night played anything resembling a classic rock cover. But, the music here is still plenty “alternative”!