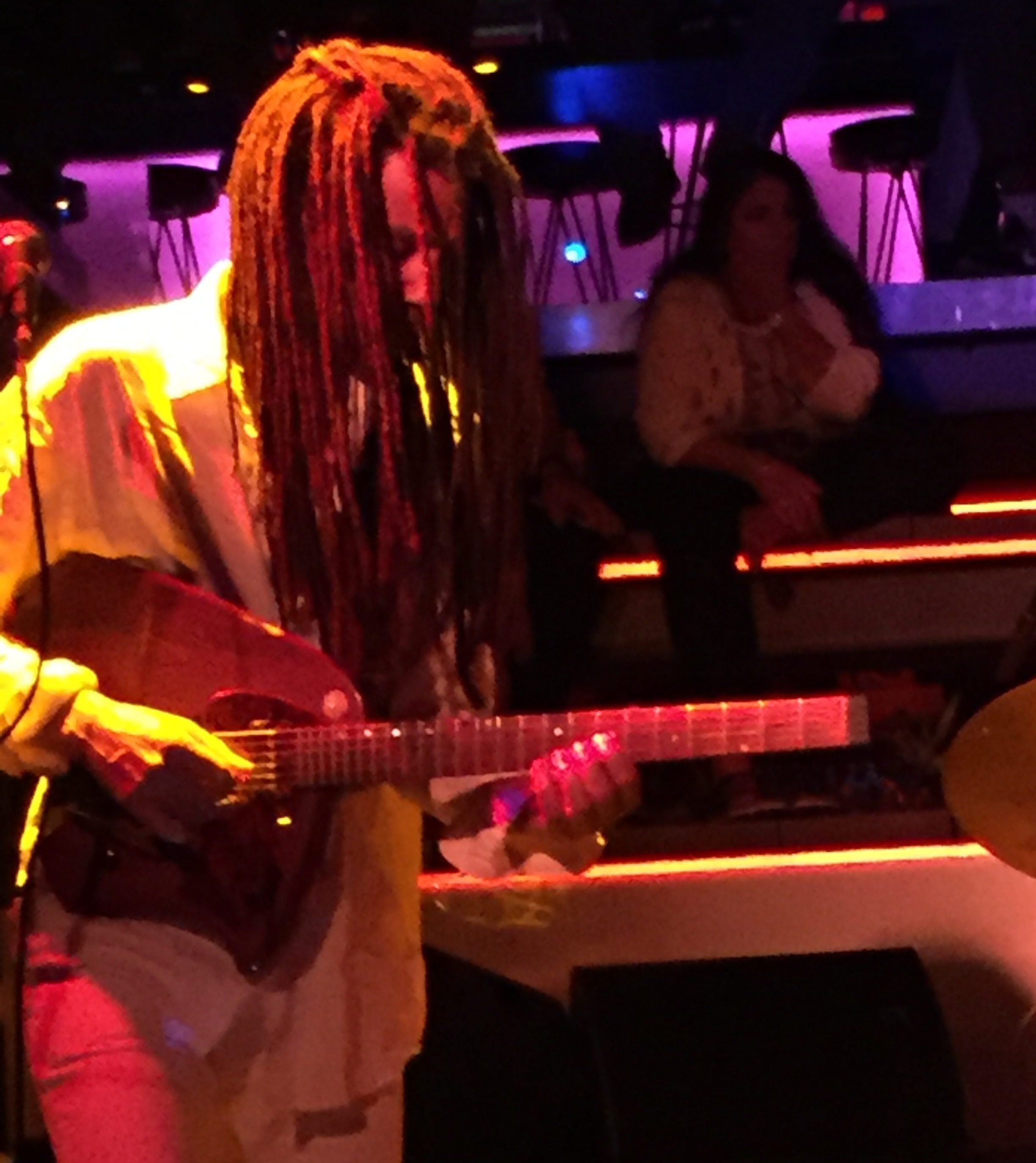 Which is to say, here’s where I got kinda lost. I searched for reference points to help me gain foothold in understanding Ross’s guitar approach in Harriet Tubman, and I found it challenging. It’s hard not to make comparisons among bands on the same bill. To my ear, the music of the preceding bands made firm contact with jazz, funk, rock, and blues, as I know it. The seeming formlessness of several of Harriet Tubman’s tunes left me wondering, initially, in what sense they are, as the band said, compositions. What I can say pretty well after the fact of the show—and after listening to the available videos of Harriet Tubman’s Alternative Guitar Summit set (links below) and comparing that music to the tracks of the same names on Araminta—is that the problem was definitely in my lack of experience with their music specifically and their kind of music more generally. But, having gained just a small amount more experience, I have no doubt—duh—that whatever doubts crossed my mind had no basis. There can be temptation to call bullshit when the real problem is what one doesn’t know (which doesn’t mean, of course, that there aren’t conditions in which bullshit can be soundly called; only that calling bullshit is no casual matter).

Brandon Ross’s closing message to the audience was encouragement of supporting music that stretches beyond boundaries, and his last words from the stage were “stay free.” But, with specific regard to Harriet Tubman’s music, free of what? In free jazz, the usual answer is free of conventions of tonality and rhythm. This seems likely to be the case for Harriet Tubman, as well, in spite of the group having a vibe that skews more toward rock than jazz. My somewhat educated guess is that little-if-any of Harriet Tubman’s music has use for the idea of a key or what many people think of as funk syncopation.

What immediately struck me about Ross’s playing, even as I felt unmoored in the music as whole, was its pure sonic impact. Even when I didn’t get what he was playing, there was still the dimension of how it sounded. The nearest comparison I can make is with some of Neil Young’s 70s era electric playing. In the era that was eventually documented on Live Rust, Young sprawls out many of his solos, keeping it both raw and melodic, but avoiding clear association with the bluesey  vibratos of other 70s rock-guitar titans. Ross’s playing in Harriet Tubman struck me as possibly coming from a similar strategic place: play electric guitar, but sever the reference to pretty much anything like a so-called “guitaristic cliché.” With nervy, fast vibrato and frequent riding of his right hand on the whammy bar of his headless Klein electric, Ross’s tone packed a sting, even when bathed in spacious reverb. The friend I attended the show with, who loves edgy guitarists, remarked on Ross’s penetrating guitar sound.

However, unlike Young’s soloing, which largely stays within the keys of his songs, Ross’s lines seemingly went the extra step of avoiding reference to a key. Even the way he positioned his hands seemed possibly intended to prohibit the playing of common fretboard shapes. In playing his jagged single-note lines, it looked to me like Ross strongly favored keeping his fingers close together, with one finger per fret, and shifting positions, rather than stretching. His fingers seemed to move in parallel and as a unit. This physical restriction, of course, informed the notes played, and the more I thought about it, this hand posture seemed like a chosen, aesthetically driven limitation. Somewhere in the deep reaches of my memory, I recall reading about guitarists employing such restrictions as a general guide away from well-worn patterns. Perhaps (and perhaps slightly paradoxically!), Ross is adhering to this strategy.

Harriet Tubman’s music was challenging to me, even by the adventurous standards of the Alternative Guitar Summit. This could be one reason I found it a little difficult to digest. Another is simply that they were the last band of the night, after two intense predecessors, and my ears were already pretty well stretched. It’s probably evident from what I’ve written above that I’m still processing the experience.

One way of thinking about music such as Harriet Tubman’s is as an exercise in subtraction. What happens when musicians remove certain elements from their music? What happens when you subtract the idea of key? What happens when you minimize funk rhythms? I don’t know how much, if at all, players such as Ross, Gibbs, and Lewis think like this. Such thinking seems more like an academic or student mode of analysis that can provide a way in to appreciating a style that needs to be transcended at some point before one truly owns that music. Then again, it also seems true that many musicians are relentless question askers, and students, and developers of their art. So, very likely, any supposed rigid dichotomy between the academic angle and the artistic angle is forced.

Another way of thinking about Harriet Tubman’s music is in terms of what it represents. The question how instrumental music represents (or carries any semantic content, for that matter) is one of those recondite philosophical questions that can seem beside the point if one just gets the music. An easier sounding question, but still one without an obvious answer, is that of what the music expresses. One way to think about this is to ask what the musicians intend to express. During Harriet Tubman’s set, Melvin Gibbs said something like, “This is the music of our people.” Given that the band members are all African-American and that the band is named after a heroic African-American, perhaps the best way into their challenging music is to think about it as their exploration of her freedom-seeking and personally demanding deeds. I don’t know if this kind of thinking will make the music easier for an uninitiated listener to grasp, but, to my mind, it may enable a path for revisiting Harriet Tubman’s music with deeper resonance. At any rate, easy isn’t what anyone should be looking for with Harriet Tubman’s music.

Someone posted very cool black-and-white video of three tunes from the very show about which I write above. Check ‘em out more than once! There’s much to be said for hearing new music live, but Harriet Tubman does not seem to be a band that plays out often, so YouTube may be the most readily available way to experience their performances.