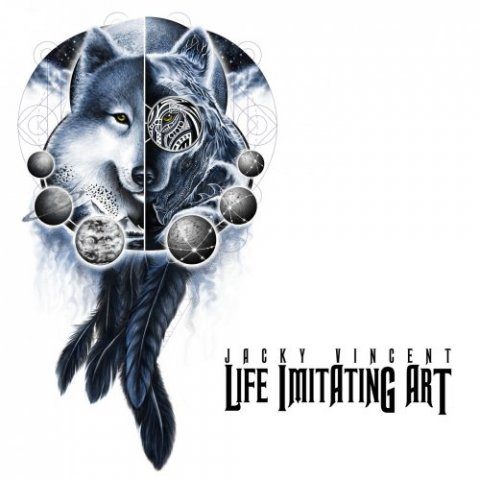 Times not recommended for listening to Jacky Vincent’s Life Imitating Art: basically anytime you want to chill. It’s not that the late-era Shrapnel Records alum is relentlessly hyped through his whole new album—relaeased August 31, 2018—but he never goes long without cranking open the throttle on his seeming V12 guitar engine. Even on the less bombastic tracks within the 40 minute collection, there’s relatively little that can reasonably be called “unhurried” or “restrained.” Nonetheless, for those familiar with Jacky Vincent from his work in the bands Falling in Reverse and Cry Venom (post-hardcore and power metal, respectively), Life Imitating Art is a different intensity.

Album opener “Awakener,” “Nowhere to Look but Inside,” and “Soul Shines Through,” all incorporate big synth sounds that would be at home in a dance club or at an arena-pop show. In some places, I wondered whether he is using a guitar-synth controller of some kind.  Replete with sudden shifts in texture; staccato heavy rhythm guitars sparring with complex synths; a neoclassical breakdown; and a brief breakneck solo excursion over a pumping dance beat, among other sections, “Awaken” lays it on thick from the start. There’s a lot of motion and contrast in the tune, and I could see Vincent going over well performing music like this on a bill with EDM acts and lots of bright lights. Nothing else the album throws in the kitchen sink quite as hard, perhaps for the overall good of the album, but each of the synth heavy tracks features interesting textures and shifts. The synth soloing on “Nowhere to Look but Inside” sounds like it could have been done with a guitar-synth controller; some of the synth lines are shaped much like Vincent’s often deployed sweep moves. With abundant guitar harmonies and high note-density runs, and with contemporary touches in lower proportion than in the album’s first two tracks, “Soul Shines Through” and “Grand Uppah” both veer into classic Shrapnel territory. Vincent’s chops are both undeniable in themselves and a key piece of the adrenaline-hyped mood he creates. Arguably the signature mood of Life Imitates Art, Vincent’s energy is thrill-ride, skateboard-getting-some-air, killer gymnastics routine, TIE-fighter battle variety; there’s little-to-no darkness to be found, something that separates Vincent’s music on this album from the gothic currents of many of the Shrapnel Records classics. Also contributing to the upbeat vibe of these tracks is the eschewing of frequency-eating, down-tuned, distorted rhythm guitars; Vincent’s charge is more power metal than djent.

In comparison to the sharp shifts in texture of the tracks mentioned above, “Rain,” ”The City,” “Run, Don’t Look Back,” and “Stars on the Waves” are more based in chord progressions. Vincent pulls the synths back into more strictly supportive roles and introduces clean, often heavily effected, guitars to create lush, colorful beds for his melodies and solos. The latter half of “Run, Don’t Look Back” modulates twice, ending, fittingly, in a key unrelated to where it began. The first modulation even involves a surprising augmented chord and related whole-tone lines that, perhaps, evoke a moment of delirium in a runner’s forward propulsion. “The City,” which along with “Meadows,” is one of only two tracks on Life Imitating Art with a reasonable claim to restraint has probably the album’s simplest chord progression, but derives interest from centering around an E major triad over a low F# in the bass (is this an Eadd2 or an Emaj9?).

In addition to chord-progression surprises, “Run, Don’t Look Back” also contains some of Vincent’s most surprising lead guitar playing. Beginning at 1:24, he begins a tapping lick, double-times it, and then shifts down the neck with artificial harmonics created by scraping the edge of his picking-hand palm down the strings as he pulls off sixteenth-note triplets. Seconds later, at 1:40, Vincent throws down a dense note-barrage that sounds almost like melodic turntable scratches. I think what he’s doing in this lick combines an initial sweep followed by tapped-and-string-skipped arpeggios descending an octave at blinding speed. To my ear, these are some of the most thrilling lead guitar moments on the album, specifically because they stand out among the impressive-but-expected sweeping and scalar moves that are standard elements of Vincent’s lead style. (If I have any criticism of Vincent’s playing, it is that his flawlessly executed sweep arpeggios occasionally seem thrown in as much by reflex as by intent.)

“The Streets Are My Racetrack” and “Jacko’s Modern Life” also shine a spotlight on Vincent’s impeccable technique. The latter is only 1:06 long, but crams in a Baroque-sounding guitar choir, a brief homage to Nuno Bettencourt, and a dizzy faux string-section run before abruptly taking up a boogie riff that recalls Jack Butler in the move Crossroads. “The Streets Are My Racetrack” reminds me of some of the not-well-enough-known instrumental work of Marc Bonilla, with its constant return to staccato, muted themes. I can’t say for sure, of course, that I’m pointing directly at Vincent’s influences on these tunes, but, even if I am, it is no crime to show where one comes from.

Especially within a collection that is a genuinely fun listen. There certainly will be those with the instinct to write off Vincent’s music because his technique is often front and center or because of his evident appreciation of EDM or because he doesn’t seem rooted in the blues or because he used to be on Shrapnel Records (his Shrapnel solo debut Star X Speed Story is a worth predecessor to Life Imitating Art). But I dig his palpable enthusiasm, his stylistic openness, his imaginative application of extreme technique, and his unabashed interest in staying connected post-Van Halen 80s-influenced guitar. Much of Life Imitates Art is certainly maximalist stuff—and fun for that—and it’s refreshing to hear that approach combined with an upbeat feel.

Nowhere To Look but Inside // Jacky Vincent // Music Video

Practice Methods//How do you practice?