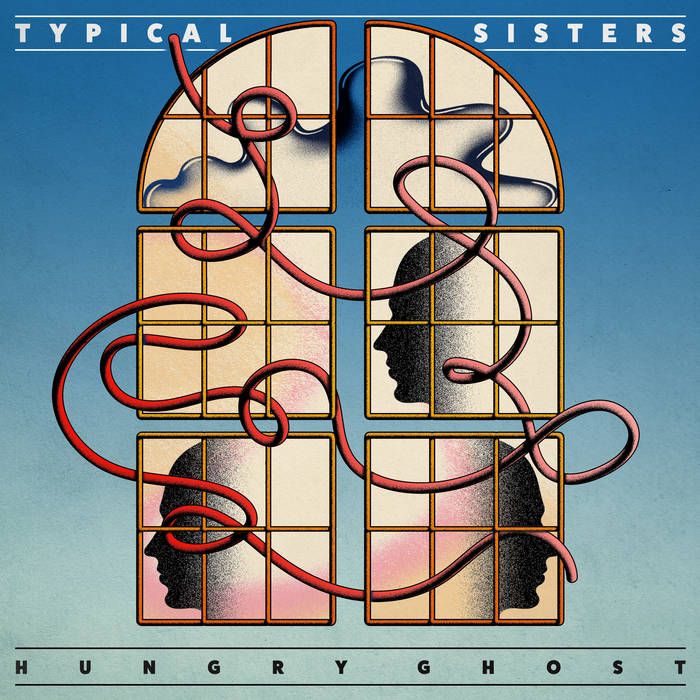 On Hungry Ghost, released March 2019, Typical Sisters explores avenues for creating urgency beyond of the borders of well-defined genres. The more I listen to Hungry Ghost, the more I hear jazz in a generalized way and the less I hear anything like a bebop line.  If one has to categorize this album, it probably makes most sense to call it jazz, but it’s jazz in the sense of connecting to jazz tradition and not in the sense of sounding like traditional jazz. That insufficient characterization shouldn’t suggest that Hungry Ghost is generic. Typical Sisters sophomore album is an expansive, challenging, and rewarding collection that reveals progressively deeper charms through repeated listening.

Shying away from obvious solos with frequent crescendos and keeping distance from from the high extreme of possible dynamic range, Typical Sisters sounds like he members of the trio—Gregory Uhlmann, on guitar; Clark Sommers, on stand-up bass; and Matt Carroll, on drums—are immediately present to each other as they balance composition and improvisation. The tunes have structures from which what feel like less planned, improvised sections emerge and to which they return. Volume-swelled and reverb-expanded guitar pads support augment the trio elements. It sounds to me like these pads are loops that are triggered and transformed during a single performance of a tune. That is, Typical Sisters sounds like a trio that generates more than three voices.

As much as the music is on Hungry Ghost is adjacent to jazz, it’s also adjacent to some of the more electronic-sounding touches of bands in the neighborhood of Radiohead and the National. Gregory Uhlmann has a hand with guitar-tone processing that is sensitive and distinctive, and he is unafraid to find the right place to thickly pour on the sonic seasoning. Check out “Goner,” at about the half-way point. Over what sounds like two layers of loops—a drone and repeating pizzicato-like pattern—Uhlmann enters with a heavily vibrato-ed and delayed tone and proceeds to dialogue with and against the loops, before abandoning at least some of the effects and ending with a return to the chord-melody of the tune’s head. “Portrait of a Fast Moving Object” prepares its solo section with what sounds to me like, at least, a reversed loop of heavily reverbed and delayed chords. The solo over this concoction leans on a few notes, which also sound colored with a reverse effect, played in rhythmic tension with the loops, bass, and drums.

Uhlmann uses a similar soloing approach on “Excavate,” before offering the most recognizably “jazz vocabulary” -informed solo of the album. Beginning with, and never straying far from parsimoniously phrased, ostinato-like figures, he peppers his solo with hints of some longer lines that use approach tones. The result is a curious and interesting reversal: the hint of more traditional-sounding jazz vocabulary becomes itself a spice, very likely because it is applied so sparingly.

Several listens in, what is most striking to me about the music on Hungry Ghost is how little it beats the listener over the head with its dynamic shifts. The music’s contrasts and section shifts are frequent, but following them requires attention. This band sounds like they both trust one another and trust their listeners to appreciate the deep significance of turns that aren’t played for maximum drama. If the sides of the hills are full of color, depth, and variety, the height of its peaks isn’t necessarily a landscape’s most salient feature.

(Gaaah . . . I’m trying to embed a Bandcamp player for Hungry Ghost below, but it’s not working . . . See the YouTube embed after this ineffective mystery code . . . .)