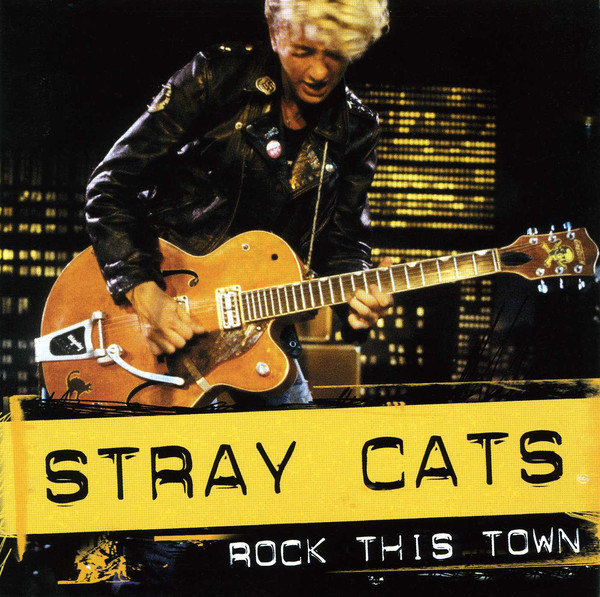 The Stray Cats breakout track and video hit may well be the defining track of the first wave of retro rock. It’s now a classic in its own right. Brian Setzer masterfully accompanies his throwback-cool vocals with clean-toned, slapback-echoed guitar moves that include jazzy sliding chords; rockabilly triads extended with sixths; and two tight, confident solos—not to mention a motor of a main riff. Released decades after the peak of rockabilly, “Rock This Town” might have seemed, at first, like the product of one more group of costumed MTV opportunists, but Setzer, along with bassist Lee Rocker and drummer Slim Jim Phantom, showed confidence that rockabilly was as enduring and vital as a lovingly cared-for 1950s hot rod with a tank full of fuel.

● The Stray Cats were outliers in their own time. They have to have had the most stripped down stage of the whole festival, even back when almost all rock concerts were all pretty raw.

● 80 minutes of an incredibly tight and hungry young band kicking all conceivable ass—the whole thing is not to be missed!

● Setzer is about 22 years old here, and his command of the guitar is already breathtaking.

● The whole band really inhabits and sells their attitude and image. “Rumble in Brighton” almost convinces you that these are actual greasers on the warpath.

● They were retro-styled, but it was still the early 80s. See “Storm the Embassy” (25:36) for both searing Gretsch treble and timely political thoughts.

● In addition to being the drummer, Slim Jim Phantom is the hype man.