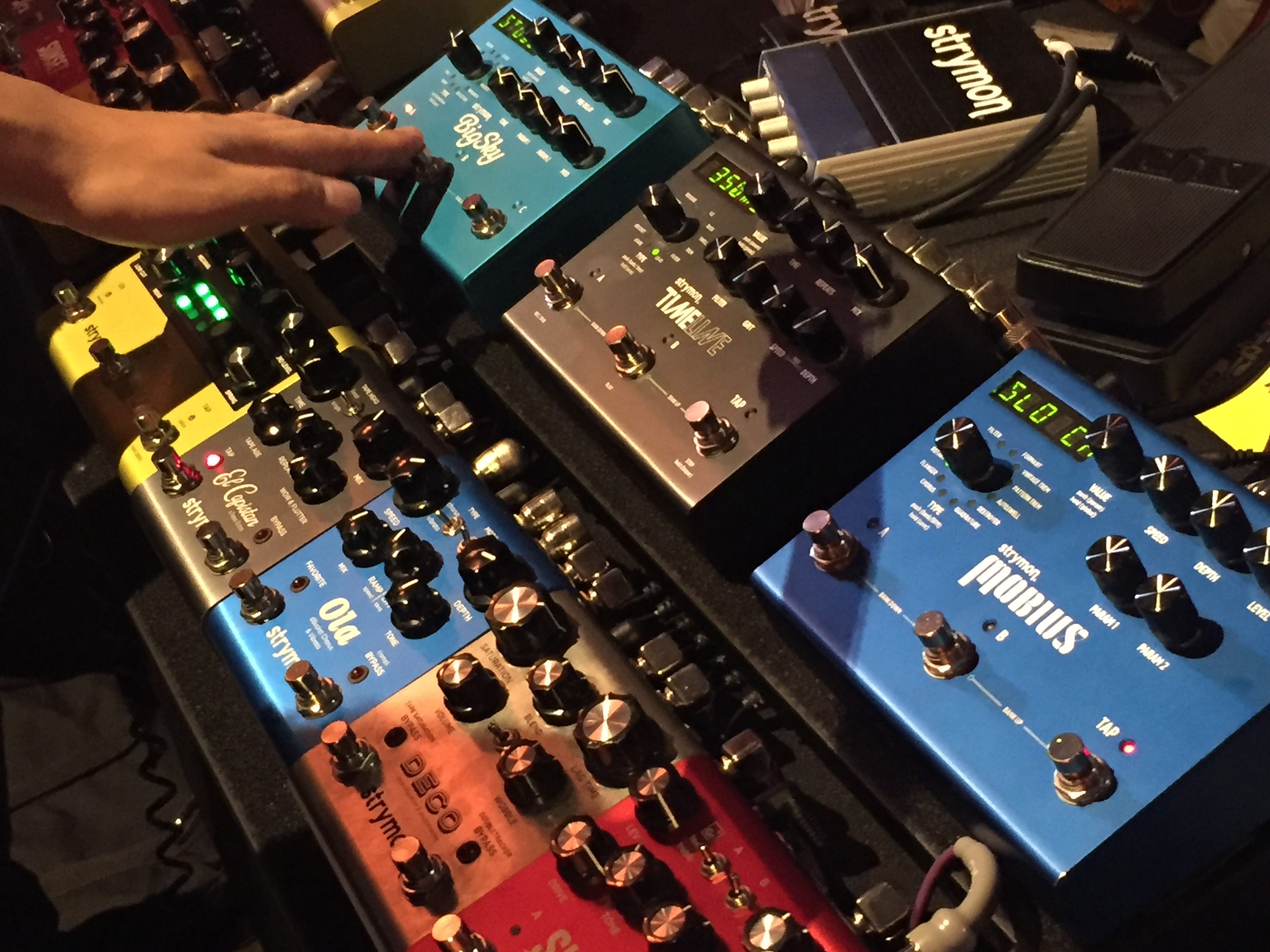 At the June 8th and 9th 2019 Brooklyn Stompbox Exhibit, musicians of all types who are pedal enthusiasts found a cornucopia of fun signal-bending technology ready to be played by anyone so inclined. What a kick it was to see the huge enthusiasm that a display of pedals generated! The exhibit, which was held at Lytehouse Studio, included the products of at least 50 pedal makers. Delicious Audio, a blog that was involved in organizing the event, reported a total of nearly 2,000 attendees.

A few big rooms, tons of music gear, and a seeming gazillion pretty closely packed people—“Well, that’ll give you a headache,” a cynic might think. But, actually, no, not at all.

The Stompbox Exhibit organizers solved the problem of volume by having all exhibitors provide amp simulation gadgets and headphones through which to run their pedals. Attendees were encouraged to bring their own guitars, and many did, although there were also guitars around from event supporter PRS. The effect (um, pun intended) was to keep the focus tightly on the capabilities of the pedals themselves. Exhibitors had their pedal boards set up on tables, and they invited attendees to plug in, turn the knobs, explore sounds, and talk directly to people who really know the gear inside-and-out. In some cases, the designers of the pedals themselves were present and up for conversation.

Which points to what was super-cool about the Stompbox Exhibit. The exhibit positions itself at a valuable and underserved moment in a player’s process of finding the right sound-shaping gear—that is, the interval between seeing and/or hearing a demo of pedal online and placing a device into one’s own signal chain and giving it a make-or-break whirl. Sure, one can find a pretty big array of pedals in many music stores these days, but when questions arise, many store staffers just Google, doing exactly what customers can do themselves. The opportunity to talk with people who have detailed knowledge of a pedal’s properties can go a long way for the prospective user. I found that the company representatives at the Stompbox Exhibit were encouraging, curious to find out what players want from effects pedals, and interested in talking about their creations. Buying opportunities abounded, of course, but I didn’t encounter hard-sell pressure.

Companies of all sizes participated, from well-known and widely distributed brands such as Boss and MXR to the one-man, one-product shop Birmingham Sounds, for which it was hard, at first, for me to find much online presence. Hi-fidelity, top-shelf digital pedals, such those made by Eventide and Strymon were present, as were “boutique” creations from makers such as Old Blood Noise and Earthquaker Devices. Of course, it was very good to see New York City-based companies Electro Harmonix and Tech 21 in the house. (You can find a list of participants here.) It was also a pleasure to encounter products and companies I’d never heard of before.

The Stompbox Exhibit is the creation of the sister blogs The Deli and Delicious Audio. The former is focused on supporting local music scenes. The latter is a must-bookmark site dedicated to pedals, pedals, and more pedals. The Deli and Delicious Audio have been organizing Stompbox Exhibits since their inaugural 2011 event, on New York City’s Lower East Side. Since then, they have extended their reach, with events in Austin, Los Angeles, Nashville, and Montreal. Delicious Audio also publishes an informative magazine (both in print and on the web) in conjunction with its Stompbox Exhibits that includes solid and informative articles, as well as a run down of Exhibit-featured pedals and ads from participants. (It’s worth noting that Stompbox Exhibits occur simultaneously with a companion Synth Expo, and that plenty of pedal exhibitors aim their gear at both guitarists and synth players.)

It’s not hard to imagine that Stompbox Exhibits will continue as regular events. For all the challenges facing music makers in the digital age, many people have the drive to create music, and a substantial subset of them, which cuts across many demographics, is stoked to shape, enhance, transform, and mangle sound. In support of this niche, the pedal-verse has expanded, and the Stompbox Exhibit supports pedal geekery. Yet, for all the makers represented at the Stompbox Exhibit, it’s also not hard to think of stuff one may have encountered online that wasn’t there, suggesting more fun stuff to check out and room to grow.