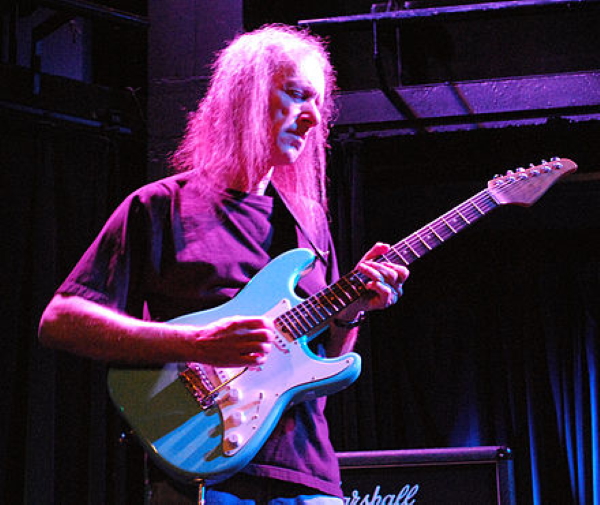 Ahead of the release of People Mover, I listened to a lot of Scott Henderson’s earlier music, getting excited to hear new stuff from him. Below are five tunes, in chronological order, from Henderson’s previous releases. They represent his early days as a sideman; his work as a key member of the fusion outfit Tribal Tech; an interesting one-off collaboration with bassist Jeff Berlin and drummer Dennis Chambers; and his solo albums, but there is no attempt at ranking and no judgment of what is absolutely essential in his catalog—except in a couple of cases.

Champion was my introduction to Scott Henderson’s playing. I knew Jeff Berlin from Allan Holdsworth’s Road Games, and I was stoked to see that the bassist had Neal Schon and Neal Peart on his debut solo album, but it was the guitar contributions of then-unknown-to-me Scott Henderson that really turned my head around. On “Three Nighter,” Henderson’s rhythmic acuity shines as he riffs in unison with Berlin, carries melodic sections on his own, and digs in on solos that capture both bebop’s melodic contours and its spaces and pauses right next to rock guitar moves.

From the mid-80s to the mid 90s, the fusion ensemble Tribal Tech was Henderson’s main vehicle for his own music. This funky Henderson-penned number places an unbridled guitar solo amid highly structured ensemble sections. Climbing trills, tremolo-picked double-stops, wide-interval patterns, a punch of bebop, and, as always, a generous supply of bends release Henderson from lockstep with the rest of the band before his guitar is surrounded by a polytonal keyboard halo and pulled back into the ensemble.

On this tune, Scott Henderson pulls maximum impact from the extra growl that results from tuning a half-step below standard. You really feel the impact of the low Eb because it’s the root of the dominant chord, not the root of the tonic, as in the case of so many Eb-tuned pieces; it’s going somewhere, not resting. The tune’s crisp interplay between Henderson’s guitar and the horns makes space for its most distinctive element: intricate, open-string pull-off licks that are, at same time, its most out-there bits and its most memorable hooks. And, of course, there is Henderson’s  tonal magic. He’s using single-coils, he’s tuned down a half-step, he’s probably playing through a Marshall; he effortless throws down bluesy licks, but he sounds only like himself. If I had to choose one pre-Vibe Station track to represent Scott Henderson’s music, this would be it.

Billy Cobham’s “Stratus” is one of the defining grooves of jazz-rock fusion, and he guitarist on the original is the way-too-soon gone Tommy Bolin. Henderson’s take on the tune, accompanied by the redoubtable rhythm section of bassist Jeff Berlin and drummer Dennis Chambers, more than lives up to the status of “Stratus.” The keyboard-free ensemble allows Henderson handle both parts of the question-and-answer melody, separating them with distinct tones, one brighter and barkier, the other dynamically softer and rounded. His raw-toned solo builds in pieces, beginning in Miles-like bluesy phrases and exploring wild overbends, notey post-bop runs, melodic whammy-bar lines, and repeating patterns before landing on the tune’s famous coda.

Rich, layered, and dreamy, “Calhoun” lives at the center of Scott Henderson’s 2015 masterpiece, Vibe Station. It exemplifies what sounds to me like Henderson’s comfort with a big picture vision of his music. On “Calhoun,” there isn’t a super-rigid distinction between the tune’s changes and its melody; even during Henderson’s solo, the melody feels present. His solo sounds supremely confident, in that he flows through a range of ideas without a sense of pressure toward reaching a very obvious climax yet without meandering. Much of Henderson’s improvisational juice is in his varied touch, which finds a broad array of dynamics via slurs, whammy slides, finger vibrato, picking placement, and pick vs. finger attacks, while seeming to deliberately not max the volume, even at the tune’s false ending. Scott Henderson ‘s vocabulary is as deep in how he plays as in what he plays.

● This is obviously not the version from “Vibe Station.” The trio performance really highlights the integration between the changes and the melody.

What Scott Henderson tracks stand out to you? Please add your thoughts in the comments section.